We already know what Android intent is and the types of intents as well.  Android Intent is used for the following activities:

Android Intent basically facilitates the most important phenomenon of Object oriented programming paradigm called Late Binding.  If you are not aware of what these two terms are then don’t worry. Object oriented programming is a type of programming where basic point of doing anything starts from object. Object is anything which has a value and can be referenced by an identifier in memory of computer. Thus object has properties. It can be anything like might be a variable or a function. Anyways, the object is not our primary concern now.  Object Oriented Programming (OOP) works with objects which have attributes and related procedures. For example, if you are a student then for a student object we will have attributes as name, age, address, etc, whereas procedures might include reading, writing, programming, etc. To make it simple let us check out the representation of object diagrammatically.

Object oriented programming is simply an approach of designing functions around data so that data can be secured from unauthorized access and hence elevates and eases programming freak points. Late Binding is one of the characteristics of object oriented programming. Late Binding is a process which implements polymorphism. When you execute your program, the declarations are resolved at runtime. They are found by their names. They correspond to a specific type. There is no compile time checking in this case.

Intent facilitates this binding in case of android apps which are again nothing but a few lines of code intelligently coded to get customer satisfaction. Intent can be thought of as gum between different activities. In an application we can have one or more activities. In the later case, these intents stick different activities together. It launches one activity from other activity. They act like data structure. They contain a summary of actions which are to be performed.

Android Intent generally consists of two different portions of information. They have primary and secondary attributes. Attributes are as follow:

Let us sort out some terms used in the above table as some of you might not be aware of them or might need a refreshing polish to your memory. 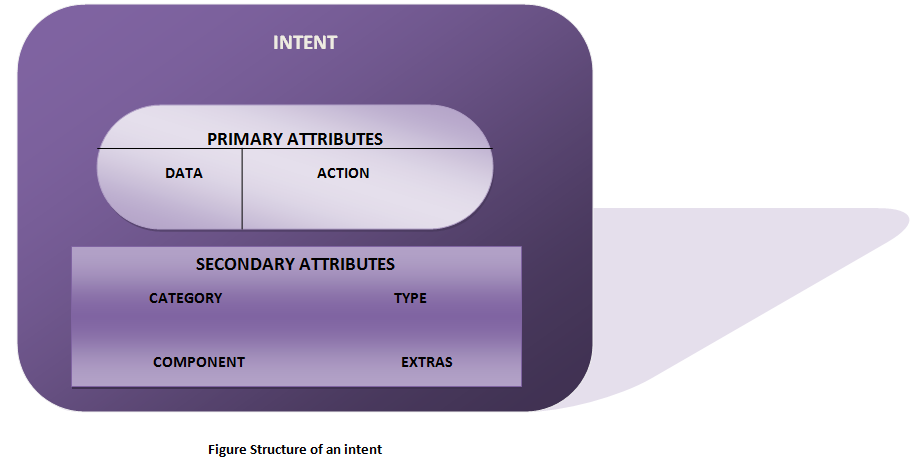 For security purpose, the intent filter should not be used for service. Service may start without notifying the user and runs in the background.

Diagrammatically we shall understand how it works. Android architecture in your device will find the component declared in intent filter and search for it in entire application. When found, it starts respective activity and performs the appropriate action.

We already have a running app called HelloWorld, let’s find out the intent filter from HelloWorld’s manifest file.

The above example shows a category and action. Action says standard MAIN action. This action is the entry point of the application. LAUCHER category says that in application launcher this entry point should be listed.  It is very important to expertise in intents and passing intents. From the next topic, we are going to use intents.

If name is not mentioned then intent becomes implicit.

Lot of keywords isn’t it. Let’s resolve them one by one.  Keywords static is used for those variables which are common to all objects in a single class in case of JAVA language. These variables are alive in the complete run of the program.  Then public keyword is used to grant access. It allows access to all other methods and they can be modified by other classes. Keyword final is used so that no method can modify it even if it has access to that variable. In the above statement, DOCOUNT is the name of the action.

The Internet media type is an identifier which indicates the type of data in file on the internet. They are also called Content-types. Internet media types are also used as a set of rules to provide communication between different applications. Say, type audio has MIME type: audio/mp4 for MP4 audio, audio/mpeg for MP3 or other MPEG audio, etc.

Now for intents, it is very important to keep clear of all the issues between Uri format and MIME type, especially in the case of methods. setData() method is used to set data for Uri and setType() to set type of MIME. Now both of them are like positive and negative forces which cancel out each other. If you want to use both of them, then we have another method called setDataAndType() to set data for Uri and type for MIME respectively. Great isn’t it!!!

There are three tests carried out to resolve intent. This is done on the basis of the three parameters of intent filters. They are compared with respect to the declaration in the app’s manifest file. So the intent in component and intent filter of manifest files is examined and the basis of examination is action, category and data. We have following tests:

Briefly let us check out these tests.

PendingIntent is an object which acts like a housecoat over an intent object. It grants permission to the foreign application to use the covered intent as if it is executed from a process homed in the same app.  For example, you might want to declare an intent which will be executed in the future at a specified time.