A thread is a basic unit to which the operating system allocates the processor time. It is an independent execution within the program. User can perform multiple tasks at a same time using threads in a program. A single threaded application can perform only one task at a time.

User has to wait for task to complete before another task is started. Multithreaded process executes one or more task at one time.

3) The Not Runnable state

When the user creates an instance of a Thread class, the thread enters the unstarted state. A new thread is an empty object of the Thread class. No system resources are allocated to it. User need to invoke the Start() method to start the thread in an application.

A single processor cannot execute more than one thread in an application. Hence, it maintains a thread queue. When the thread is started it is lined up in the processor time and waits to be executed. Hence, the state of the thread is to be runnable and not running.

3) The Not Runnable state:

A thread is said to be in not runnable state if:

a) Sleeping: A thread is put in the sleeping mode by calling the Sleep() method

b) Waiting: A thread can be made to wait for some specified condition to be satisfied by calling the Wait() method.

c) Blocked: A thread can be blocked by an I/O operation. When the thread is blocked, it enters the not runnable state.

Thread Priority is the property used to specify the priority of one thread with respect to the priority of other thread. Execution of multiple threads is scheduled on a single processor in a specified order. The priority of the thread is as follows:

The ThreadPriority.Highest property specifies the priority setting of the thread. If there are multiple threads with the same priority available in the system, the scheduler gives each thread a fixed time slice in which they execute.

Some of the properties of the Thread class in ASP.NET are as mentioned below:

Some of the methods of the Thread class in ASP.NET are as mentioned below:

The code snippet to demonstrate the concept of multithreading is as shown below:

The output is as shown below: 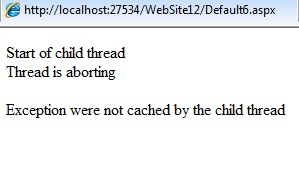