tag_of_name is the identifier which represents enumerated data type

member_1, member_2,... represents constants of type integer. These integer constants  are represented by their detailed names. These are known as enumerators.

Member_1, member_2 are not variables. They are constants. Compiler itself assigns value 0 to first member or member_1, value 1 to member_2 and subsequent members will be assigned the values in increasing order sequentially.

Let us consider an example of enumerated data type so that it can be better understood:

Compiler will assign vale 1 to it, operations will be assigned value 2 and so on.

Since we know the syntax of defining enumerated data type next step is to declare variables for this data type. Syntax is as shown below:

Let us consider the above example of enumerators and using that the variables will be declared as :

emp, em are the variables of enumerated data type

We can explicitly assign values to these enumerators also. Let us consider an example:

month1, month2 are the variables of enumerated data type

We can assign values to these members. Let us consider the example

Let us consider a program to illustrate the enumerated data type.

Program looks similar in the editor as in the following snapshot: 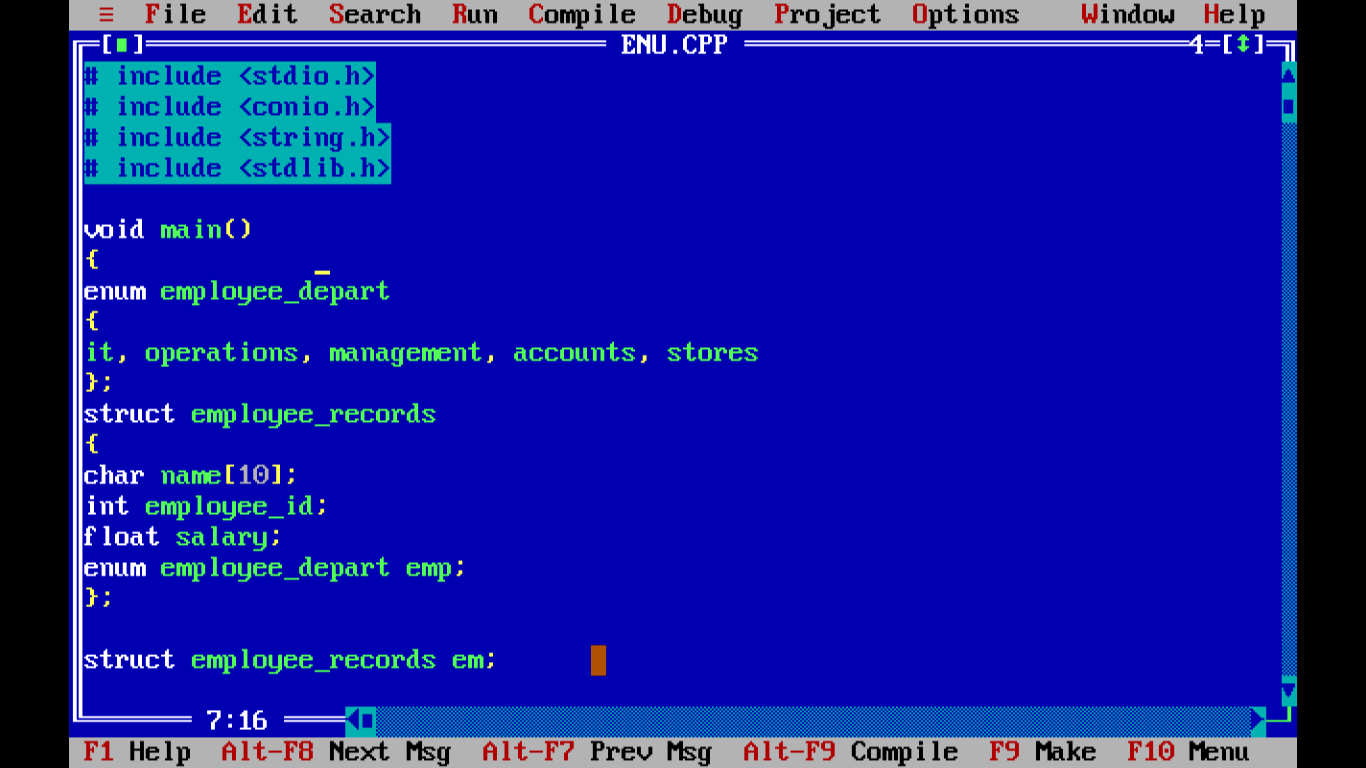 After compiling programs looks similar as in following snapshot: 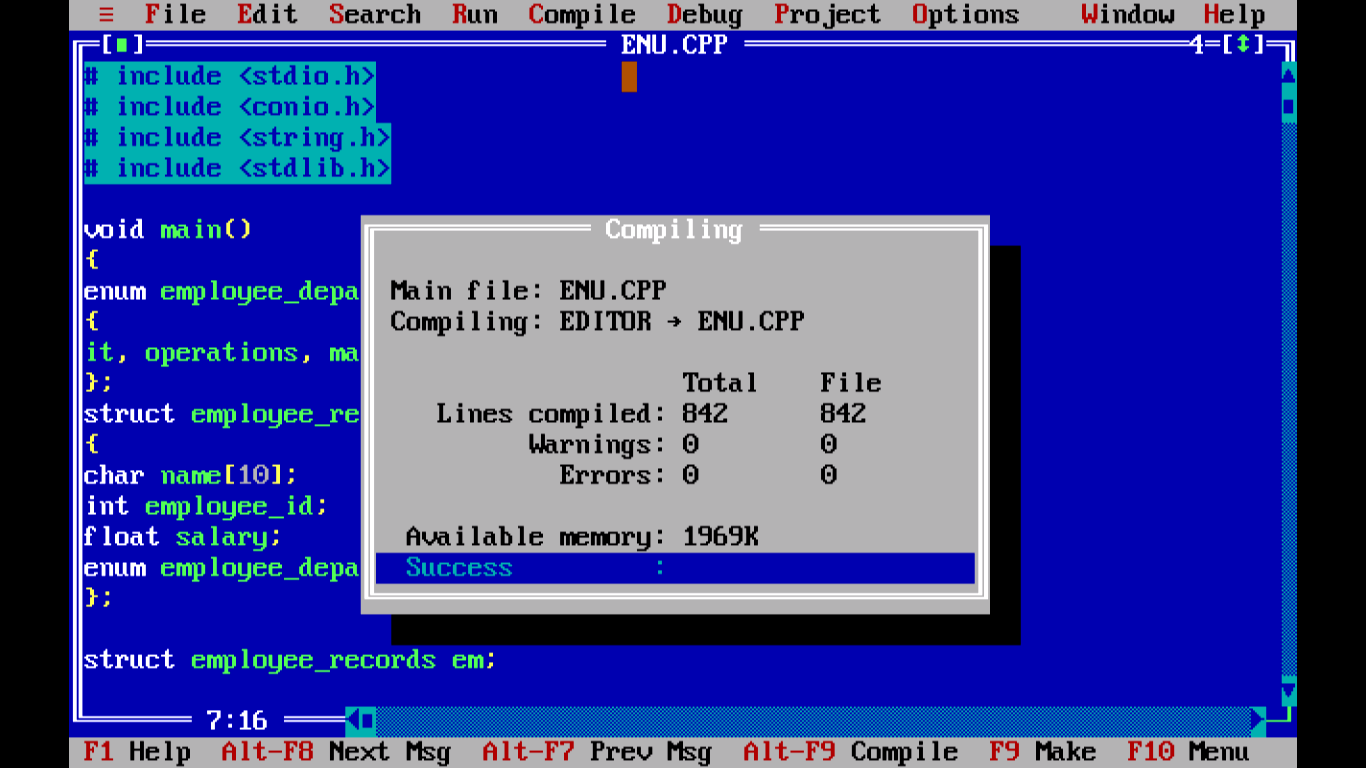 Output of program looks as shown in following snapshot: 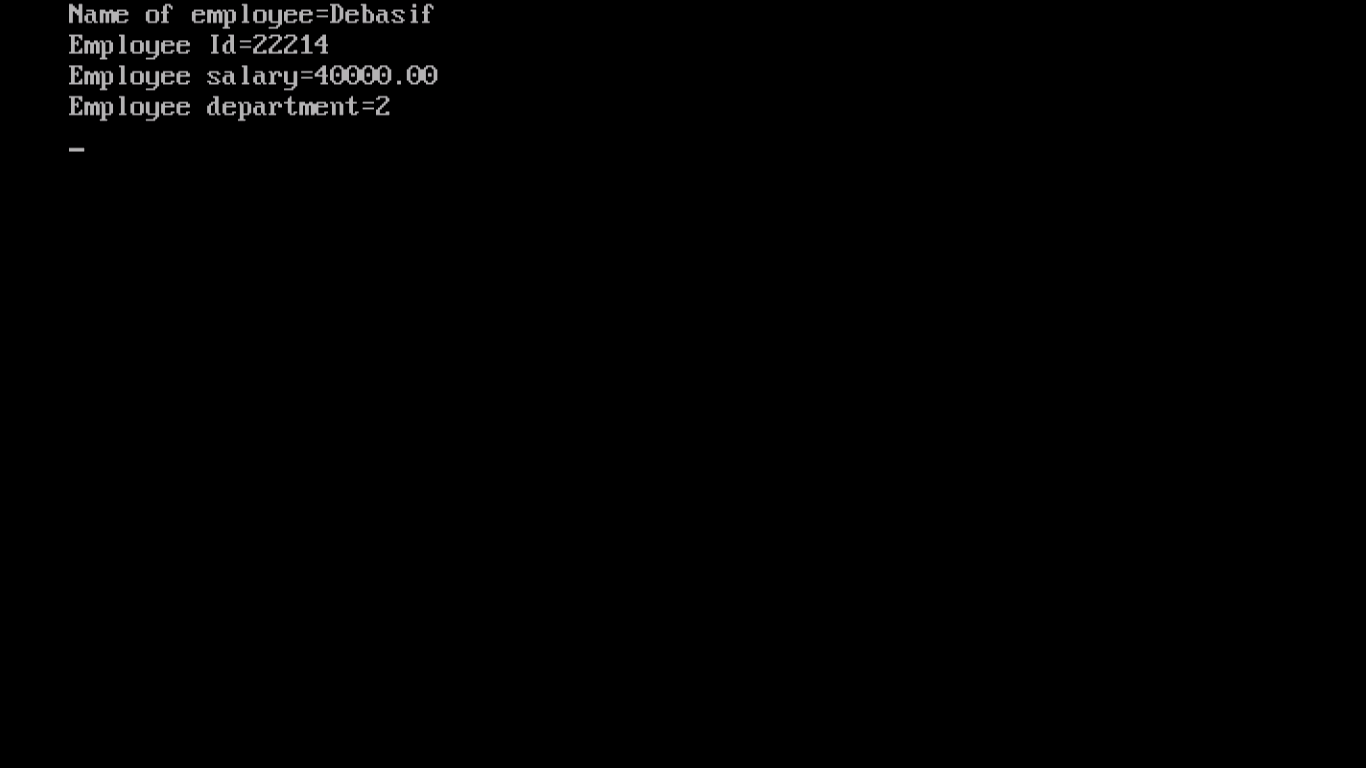 tag_of_name is the name of identifier

union tag_of_name represents the derived data type when combined together

data_type_1, data_type_2 are the data types of members

member1, member2 are the fields or members of union

Let us consider an example of union

type is the name of tag

d,i,c are the members of union of data type double, integer, char respectively

data is a variable of type union

/* Program to illustrate unions in C */

Program looks similar in editor as in the following snapshot: 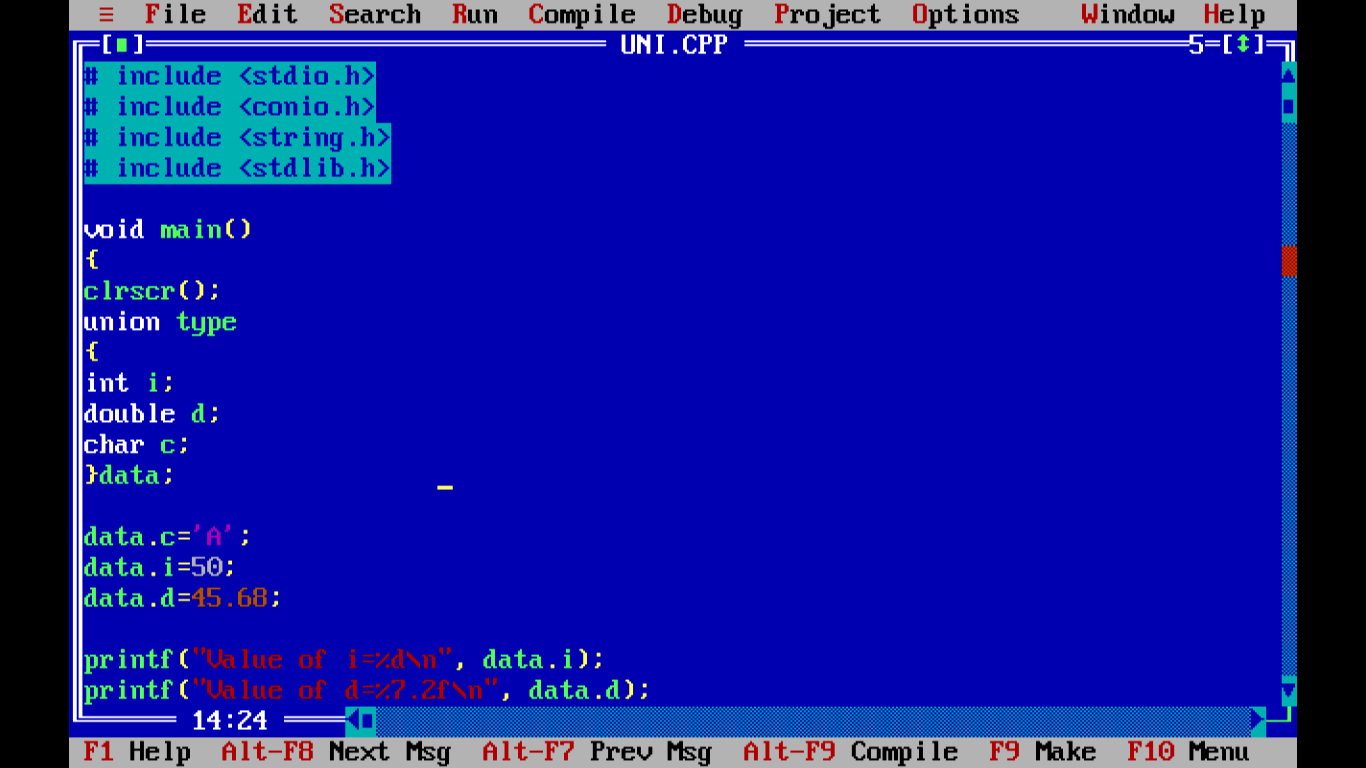 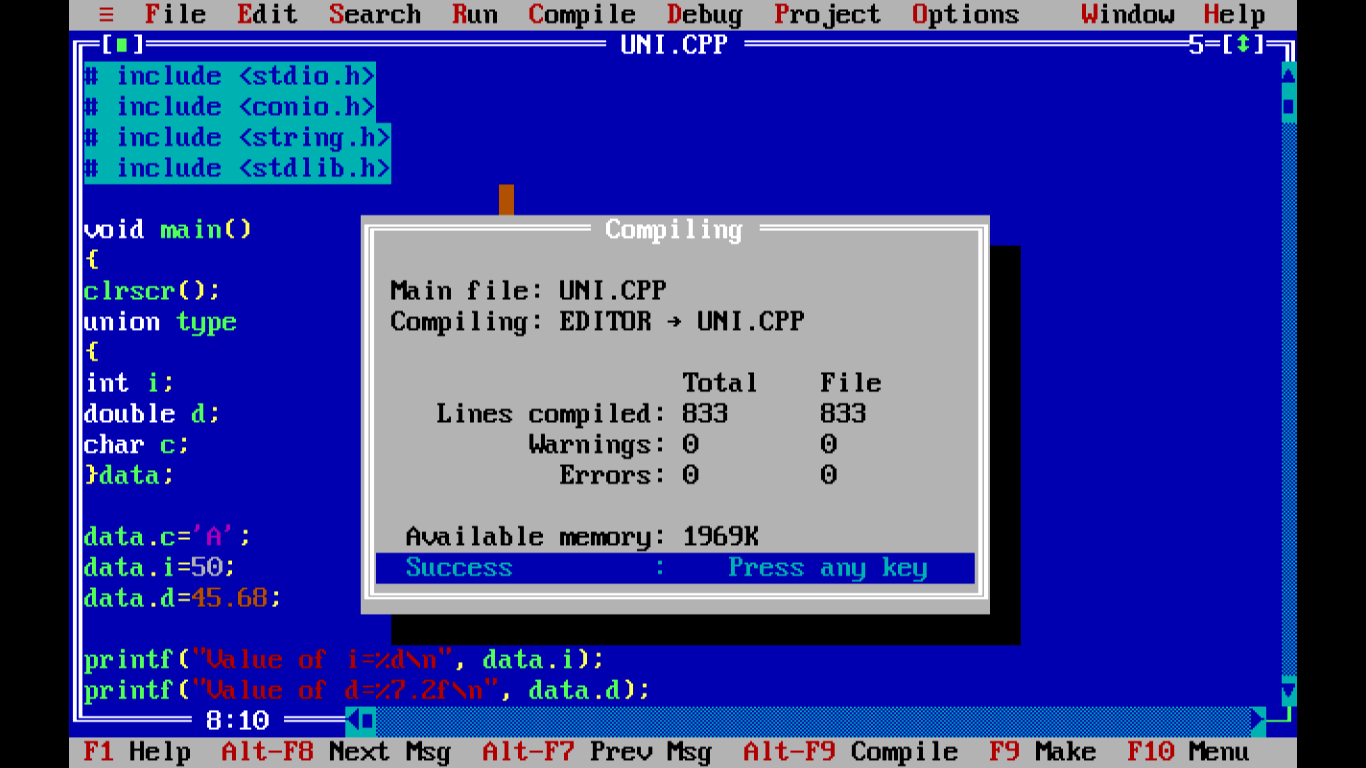 Figure - After compiling Program to illustrate unions in C

Output of program is as shown in the following snapshot: 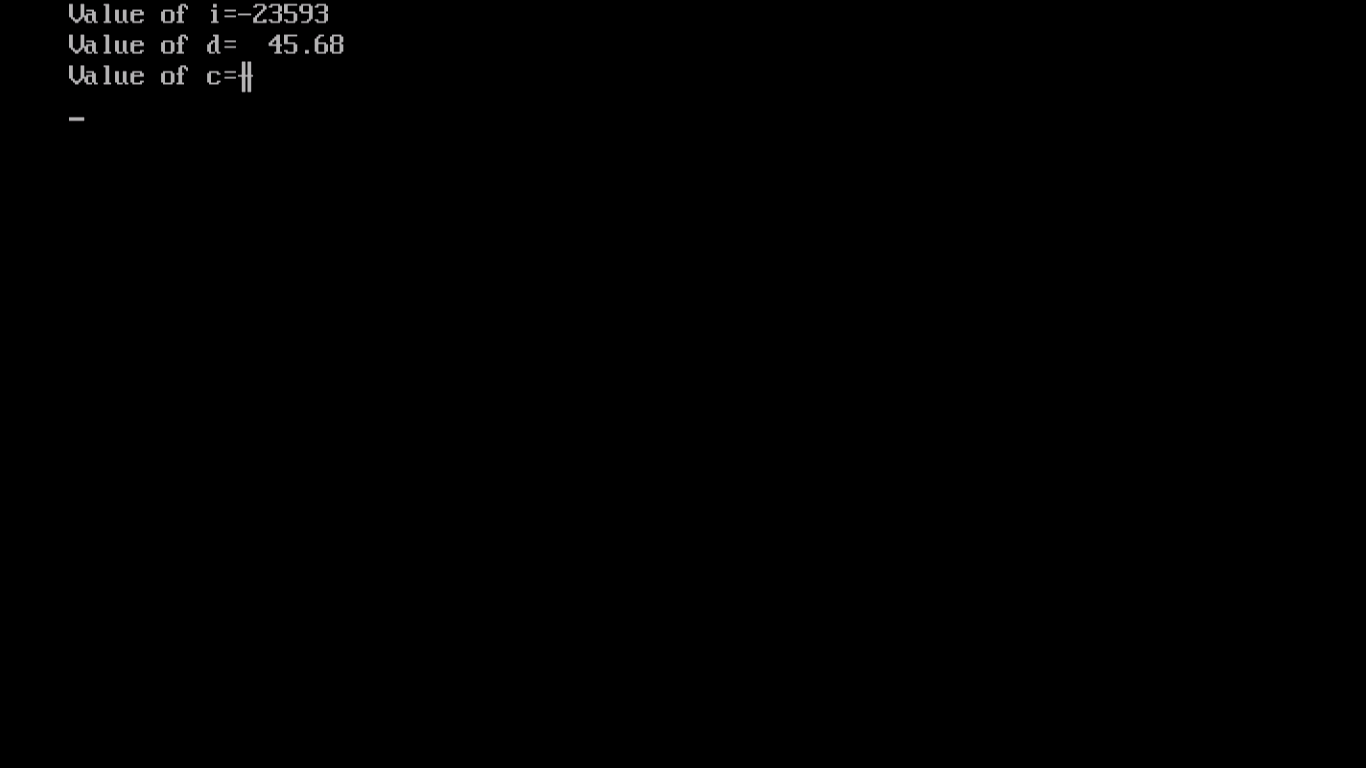 FIgure - Output of Program to illustrate unions in C

We are concluding this chapter here. Next chapter is dedicated to typedef. Thank you.