10 - Introduction to Classes in C#

A class is a template that defines the form of an object. It specifies both the data and the code that operate on the data. C# uses the class specification to construct objects. Objects are the instance of a class.

When user creates a class, we can declare data that it contains and the code that operates on it. A class is created by the use of keyword class. The general form of a class definition that contains the instance variables and methods is as shown below:

The class keyword is preceded by the access level. Depending on the access specifiers, the objects can be accessed by the user.

Consider an example of class called as Building. The Building class consists of three instance variables as floors, area and occupants. It does not contain any methods. It is a data only class created by the user. The code for the class is as shown below:

A class definition is the creation of new data type. In the above example, Building is the new data type. The class is only the description of the type. The actual object is not created by the class. The preceding code does not cause any object of type building to come into existence.

To create a building object, the following statement is used.

The declaration performs two functions. First, it declares a variable called house of the class type Building. Second, the declaration creates an actual copy of the variable and assigns to house a reference to that object. The new operator is used for the creation of the object. It dynamically creates the memory for an object and returns the reference to it.

To access the variables of the class, you can use the dot (.) operator. The general form of the dot operator is as shown below:

The object is specified on the left side and the member on the right.

The code sample for the class building is as shown below:

A constructor is a type of method that is invoked directly when you create an instance or object of a class. They are responsible for object initialization and memory allocation of its class. There is always one constructor in every class. The constructor name is same as that of its containing class.

There are two types of constructors supported by C#. They are as mentioned below:

The example to create Instance constructor is as shown below:

In the preceding code, there is no return type specified for the Calculator() constructor. This is because constructors do not have any return type. The no1 and no2 variables assigned with values 100 and 200 respectively.

Static constructors are used for the initialization of the static variables of a class. The static keyword is used for creating the variables. The values that can be shared by all the instance of the class are stored. They contain an implicit private access.

The following code snippet demonstrates the static constructor in C#. 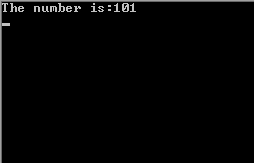 The following code shows the use of the constructor with parameters.

The output for the following code is as shown below: 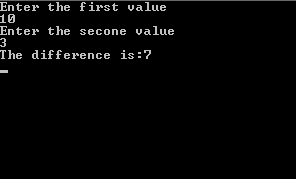 In the above code, the initialization values are passes to the member variables during the creation of object. While accepting the values from the user, Convert.ToInt32() method is used to convert the string to integer value.

Destructors are the special method used for releasing the instance of a class from memory. A class can have only one destructor. The memory cleaning action is performed using the destructors. The .NET framework constantly checks for the objects that are released from the memory.

A destructor has the same name as its class but it is prefixed by ~ symbol, which is represented by a tilde. The following class demonstrates the use of destructors in C#.

In the above code, the .NET framework automatically runs the destructor to destroy the objects in the memory and displays the message.

The steps in creation of the life cycle of an object are as mentioned below:

1) The new operator allocates the memory on the managed heap

3) The object is used for a period of time

Allocation of an object: When the new object is created, the memory is allocated with the next location on the managed heap. If there is memory available, the garbage collector does not search for the allocation space.

Generation 0: They are used to collect the short lived objects are collected quickly. Objects that live a generation 0 collection are passed to generation 1.

Generation 2: Objects that are passed from generation 1 are the longest lived objects. They are less frequently collected.

The following code shows the life cycle of an object.