The list of features of C# are as mentioned below:

6) The enumeration members are placed in its scope

7) The garbage collection is automatic through the finalization process

10) The C# code can be compiled on various platforms

The .NET framework is responsible for executing the C# program in the system. Framework is the combination of common language runtime and a set of class libraries. The implementation of Common Language Infrastructure (CLI) is done through Common Language Runtime (CLR). 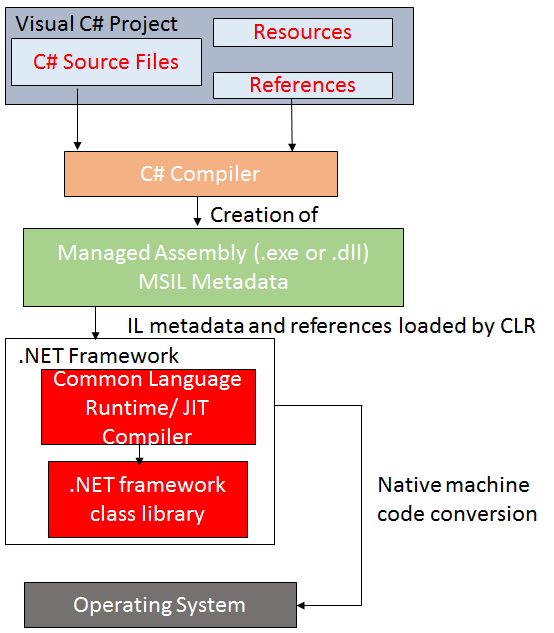 Common Language Runtime (CLR): The CLR is the most important component of the .NET framework. It is an environment where all the programs using the .NET technology are executed. The services provided by CLR includes code compilation, memory allocation, and garbage collection. The code is translated into Intermediate language (IL). The IL code can be executed across different platforms.

IL is converted into machine language during the execution by Just – In – Time compiler. During the JIT compilation, the code is checked for type safety. CLR consists of common set of rules followed by all languages of the .NET framework. This set of rules is known as Common Language Specification (CLS). CLS helps the objects and applications created in certain language to interact with the object and applications of another language.

CLS has the specification defined as Common Type System (CTS). It provides a type system that is common across all languages. CTS is used to define the data types declaration, use and managed in the code at run time.

During the execution the CLR performs the following tasks:

2) JIT compilation: Before the code is executed, the IL code is converted into machine language by the JIT compiler. In the verification process, the IL code is checked for memory locations available to access, methods called through the properly defined types.

Base Class Library: The .NET framework class library works with any .NET language such as VB.NET, VC#, VC++.NET. The class library provides classes that can be used in the code to accomplish the common programming tasks.

The .NET framework class library consists of namespaces that are contained within the assemblies.

Namespaces: The namespaces helps user to create logical groups of related classes and interfaces. It allows user to organize classes that can be used for accessing by other applications. They can be used to avoid conflicts between classes that have same names.

Assemblies: An assembly is a single deployment unit that contains all information regarding implementation of classes, structures and interfaces. The assembly holds the information about itself. The information is known as metadata.

At the presentation layer, .NET provides user with three types of interfaces. They are as mentioned below:

1) Windows Forms: They are used in Windows based applications.

2) Web Forms: They are used in web applications for providing user interface. They provide user with web browser interface.

3) Console Applications: They are used to create character based console applications that are executed through command line.

The list of features of the .NET framework are as mentioned below:

2) .NET Remoting: It supports the exchange of generic types. It improves the performance of network load balance remote clusters.

3) XML: User can validate the DOM tree stored in an XmlDocument instance through XPathNavigator..

7) Windows CardSpace (WCS): It is a digital identity to online services. It states how the user will be electronically represented.

8) Parallel Computing: It is programming model for writing multithreaded and asynchronous code simplifying the work of application developers.

9) Manage Extensibility Framework: It is a new library in the .NET framework that helps to build extensible applications.

10) Application compatibility and Deployment: The .NET framework is compatible with applications that are built with earlier versions of .NET framework.

12) Implicit conversions: The .NET framework implicitly converts the type of local variables, arrays, and other components declared in an application.