All applications require some persistent  mechanism to store the data to avoid data loss. In Java applications generally relational databases are used to store the data. With traditional JDBC, developer has to write a bunch of boilerplate code and takes the responsibility of opening, closing of connections, statements, result set  etc. Also with traditional JDBC, the developer has to manually process the result set to construct an object.

With Object oriented programming languages like Java, C++ etc., everything is an object and so is the need to store the object representations in a database. To map the Object to relational databases there are ORM (Object Relational Mapping) frameworks available like iBatis, Spring DAO, Hibernate, etc. whose primary responsibility is the mapping of data between relational database and Objects.

All that the ORMs provide a set of API to interact with the database and perform operations on a database along with features like transactions, dirty checking etc.

Hibernate is one of the most powerful , widely used, open source and freely available product for the efficient persistence of Java objects. Hibernate provides a way to map our POJO  objects to relational database tables.

Using Hibernate as a persistence framework provides an opportunity for developers to concentrate on the business logic instead of putting efforts on SQLs, writing repetitive code which is required in traditional JDBC. 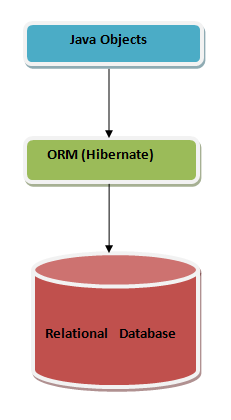 JPA stands for Java Persistence API and is a set of specification and not an implementation. All the JPA provides needs to implement and follow the specifications provided by JPA.

Hibernate is one of the JPA provider which means Hibernate implements the JPA specifications.

In simple words – JPA is an interface where as Hibernate is an implementation of JPA.

1.4 Why to use Hibernate

Any framework becomes popular and widely used because of its features. We have discussed several features  and advantages of hibernate in this chapter, but some of the key reasons of using hibernate are-