To overcome all these problems Microsoft has introduced a new technology of Window store applications development. These apps can execute on various devices and support interaction in various ways. This new technology is possible after the launching of Windows 8 operating system by Microsoft.

In Windows 8 OS, a new interface is introduced by Microsoft, some of the new elements of this OS are: 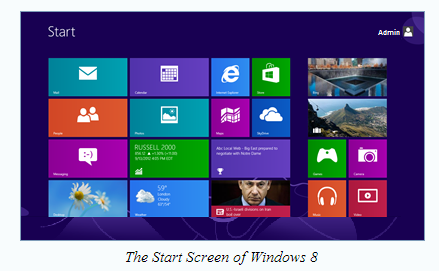 On start screen Start button is not present. It contains all the apps in tiled format. We can launch an app by clicking on its tile.

In Windows 8, all common tasks like searching, sharing, and configuration are provided on charms bar. By default it is hidden, we can access it by using Windows logo + C keys together, by moving mouse pointer to the bottom right or upper right corner of the screen or in touch screen devices we can access it by swiping inwards from the right edge of the screen.

By default it is also hidden and appeared when we press Windows logo + Z keys together. On touch screen device it can be access by swipe from the top or bottom edge of the screen. It can also be appeared when a user right clicks on the screen. 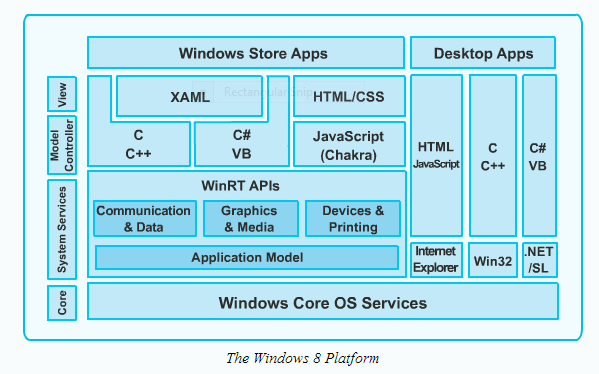 There are following parts of windows 8 application architecture:

It contains all the services provided by the Operating system like Scheduling, Security, Cryptography, Threading and File management.

It contains APIs (Application programming interfaces) provided by WinRT.With the help of these APIs, applications can be developed that can communicate with other apps and devices.

It contains the language in which a developer can develop Windows store apps.

It contains the markup languages those are specifically used for designing the windows store app like HTML5, CSS and XAML.

WinRT is a bundle of various APIs those are logically categorized on the basis of their purposes. 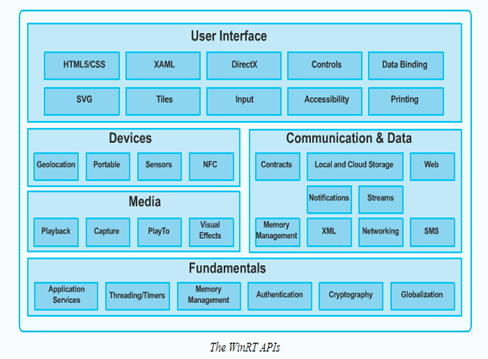 Asynchronous programming is very essential, it supports multiple thread execution so that more than one task can be executed at a time and optimum use of processor can be achieved. In Windows store app WinRT provides this feature with the help of APIs. The method regarding this uses keyword Async, which indicates that these are asynchronous. Await operator is used to call this asynchronous method.

It can be shown using following code snippet:

await is the operator that is used to call ShowAsync() method. async is the keyword that is used with the definition of bttn_submit_click () method.