A communication channel refers to the transmission medium over which a signal can be transmitted from source to destination. We have learned that in communication, information is transmitted from the sender to receivers through signals. These signals carry information modulated upon them which may be something like a string of digital bits. Now, these signals may need a physical medium to travel as in case of electrical signals. In radio communication however, since these signals are electromagnetic waves, they don’t really need a physical medium. However, the do need a part of the electromagnetic spectrum. Thus in wireless technologies the part of the spectrum in use is generally a radio channel over which waves of certain frequencies can be transmitted.

To understand radio channels, we must first understand how a signal is formed. Look at the figure below:

Each channel has a range of frequencies and this range is measured by its Bandwidth in Hz. Bandwidth is the difference between the highest and the lowest frequency within that channel. It is thus and efficient measure of a channel’s capacity of transmitting information.

The quality of a signal transmitted over a channel is determined by its SNR value. SNR stands for signal to noise ratio. SNR is the ratio between the signal power and noise levels in a channel.

Apart from the above there are a few terms you need to understand which are defined below:

Base Station:  A fixed station, used for radio communication with mobile transceivers is called the base station.

Forward Channel: The channel used to transfer information from base station to the mobile subscriber is called the forward channel.

Reverse Channel: The channel used to transfer information from mobile to the base r is called the reverse channel. 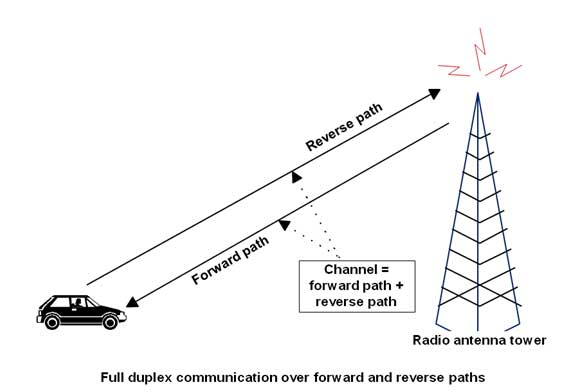