While processing a file in Hadoop ecosystem, it gets converted into a block or gets split into multiple blocks depending upon the size of the file. Each block is made up of a default size of 64 MB. 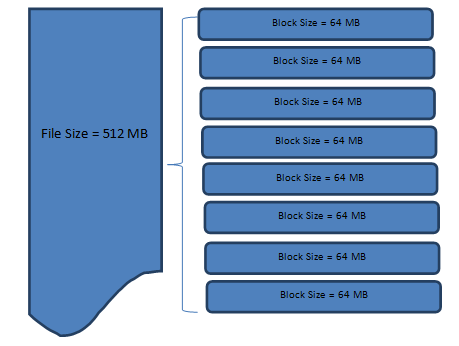 Here the file that comes for processing has a size of 512 MB. So, Hadoop will convert it into 8 different blocks, each with 64 MB size (In this example we have kept the default block size  which is 64 MB). Now instead of this file, 8 different blocks would be processed by Hadoop.

Now question comes - what happens when your file size is less than block size?

Here is the answer:

Hadoop utilizes its resources based on the size of the file (remember it is Best for Big Data), however when a file comes for processing that has a size  less than the assigned block size, then it will get processed in a single block. It has following drawbacks:

So, how to deal with this kind of situation?

Answer is to modify the default block size as per the size of file. In this case we could lower down the size from default value 64 MB to something else.

Hadoop system runs over the cluster of commodity computers (Known as Data Nodes) and  when any of these Data Nodes fail,  we are going to lose the data that is on that particular machine.

In order to overcome this problem, Hadoop has a mechanism of Block replication among the Data Nodes. This means that the data that is available in one machine would get replicated and available on other machine as well. This will assure data availability all the time. The default replication factor is 3; this means that at any particular point of time there would be as many as 3 copies of the same data that would be available in the cluster of Hadoop.

Now, One can think that by replicating same data we are introducing redundancy in the system.  Definitely we are adding additional burden in the system by carrying same data over  and over again. But think this way that, we took care of Node failure issue and most importantly we have saved the data. If we lose data then sometime you need to waste a lot of time and resources in getting back that data.

Rack consists of sequence of Data Nodes. Single Hadoop cluster may have one or more Racks depending on the size of the cluster. Let us understand how the Racks are arranged for small and large Hadoop cluster.

This is a Hadoop cluster which is considerably small in size where all machines are connected by a single switch. In this type of cluster, we normally have a single Rack. For Block Replication (where Replication Factor = 3), first the Name Node copies data to one Data Node and then other two Data Nodes get selected randomly.

We have taken care of two things –

If any of the Data Node goes down then data would be available in other two Data Nodes.

In this case if one of the Racks (Even the Rack with two Data Nodes) goes down then our data would be available over other Rack (With one Data Node).

In both the scenarios our data is safe and it will continue to ensure availability. 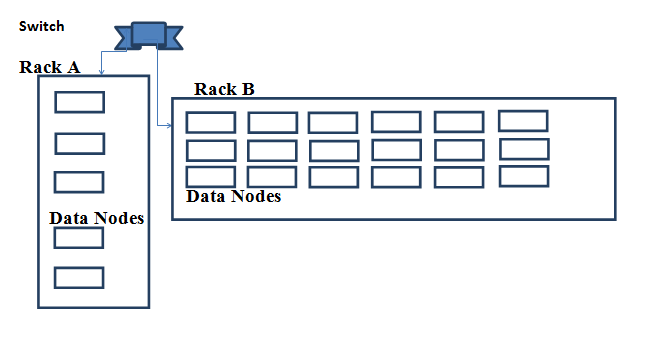 NameNode is the main central driving component of HDFS architecture framework. It is a Master node, keeps a track of files assigned to Data Node.

Its Major Responsibilities include:

Keeps track of which file is located where in the cluster. When a file is processed in the form of several Blocks then Name Node knows the exact position of Block in the Hadoop cluster i.e. among the Data Nodes.

Client application sends a request to Name Node to perform some file related operation such as add, move, copy or delete. Then Name Node responds to the requests by returning a list of appropriate Data Nodes wherever data particular to that file is available.

Upon failure of a Data Node it is the responsibility of Name Node to replicate blocks (those that were running on that particular failed node) to some other Data Node available in Hadoop cluster. After that, it updates the Meta data information.

The Name Node is a Single Point in Hadoop that means whenever Name Node goes down we lose all information available in it. We have something known as Secondary NameNode that was not the backup (Standby) of the Name Node. It only created checkpoints of the namespace. This was the configuration available before Hadoop 0.21 version, but after that we have Backup NameNode that is the mirror image of Name Node and can act as Name Node in the cases when actual Name Node goes down.

Some best practices with Hadoop NameNode

Its Major Responsibilities include:

Update to Name Node with their live status

Every Data Node sends a heartbeat message to the Name Node every 3 seconds and conveys that it is alive. In the scenario when Name Node does not receive a heartbeat from a Data Node for 10 minutes,  the Name Node considers that particular Data Node as dead and starts the process of Block replication on some other Data Node.

Data Node stores a Block and maintains the checksum for it. Data Node is accountable for verifying the data even before storing it and its checksum. A client writes data and sends it to cluster of HadoopData Nodes and the last Data Node in the pipeline verifies the checksum.

Client does a checking and when Blocks do not match with their available checksum then it will request the same Block from another Data Node which has a replication copy of that Block.

Let us see some hardware configuration scheme for a Data Node

Job Tracker manages the Task Trackers and tracks the resource availability, progress of submitted Job and any occurring fault tolerance in the system.

JobTracker receives requests from client and assigns this request to Task Trackers with the information of the tasks to be performed. While assigning task to Task Tracker, the Job Tracker first checks for Data Node in following order

In the event when Data Node fails, then Task Tracker assigns the task to other Task Tracker where the replica of the same task exist. This will any how make sure that the task is going to be completed.

Let us try to understand all its functioning in more detail –

MapReduce programs are the core of Hadoop eco System built to compute large volumes of data in a parallel manner across cluster of computers. The basic feature of Map Reduce paradigm is to divide the task among various Data Nodes to perform execution on these Data Nodes and then in return collect the output from all these Data Nodes. The first part where we divide the task across cluster of computers is known as Map while getting the output and collect it back is known as Reduce.

Let us understand it with this example, suppose we have three files with data as –

File2 – I am reading a Book

File3 – Book is a good source of knowledge

So, output should be –

Let us execute this task in Hadoop ecosystem. Assume we have three different instances of Data Nodes running in our cluster. All three files would be executed in three different Data Nodes. A Mapper program will be responsible for taking the frequency word count from each individual Data Node. And a Reducer program will be responsible for collecting frequency statistics from each individual Data Node and after that perform aggregation by doing sum of count for each word group.

After doing this exercise we should receive output mentioned in the table.

Let us see below diagram and understand Map Reduce Paradigm 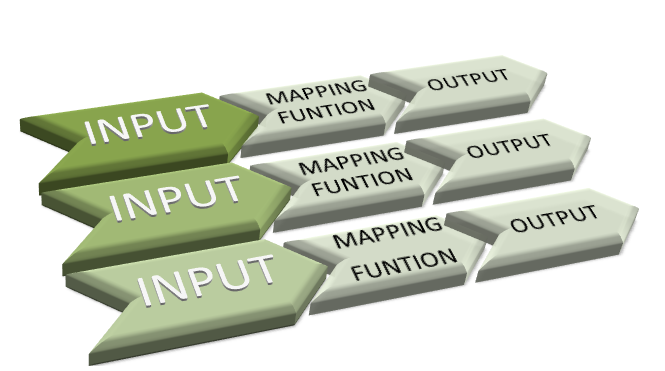 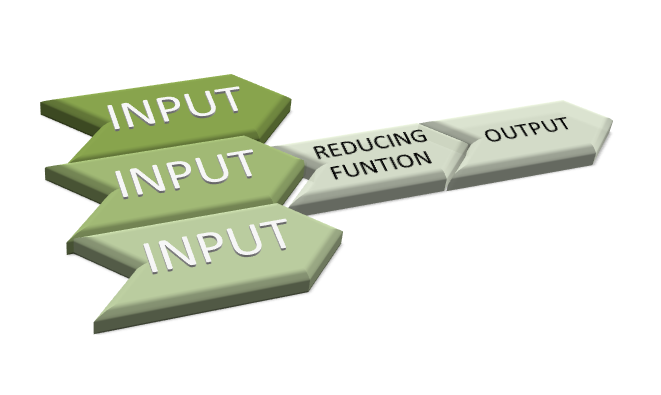 HDFS is Hadoop distributed file system. HDFS defines the way the storage will take place. HDFS is built to yield maximum throughput. Its efficient performance seen while working with large data sets.As we have already mentioned that HDFS is Highly Available and Very Scalable. We have also seen how by utilizing the concept of replication, it is fault tolerant. The effective Map Reduce paradigm boost its capability of high end distributed computing in a parallel environment. Below diagram shows how various components of HDFS are connected and work as a single massive unit.

Name Node and the Job Tracker get list of all rack ids associated with their Slave Nodes.  By using this information HDFS creates a mapping between IP address and received rack id. HDFS applies this knowledge for Block replication over different racks.

Hadoop does one more thing very intelligently and that is identifying the performance of Data Nodes. If it identifies slowness of any Data Node while execution, then it immediately runs the same redundant job on a different Data Node. So, now the same task is being run over two different Data Nodes. Here whichever Data Node’s task gets completed first that gets reported to Job Tracker. 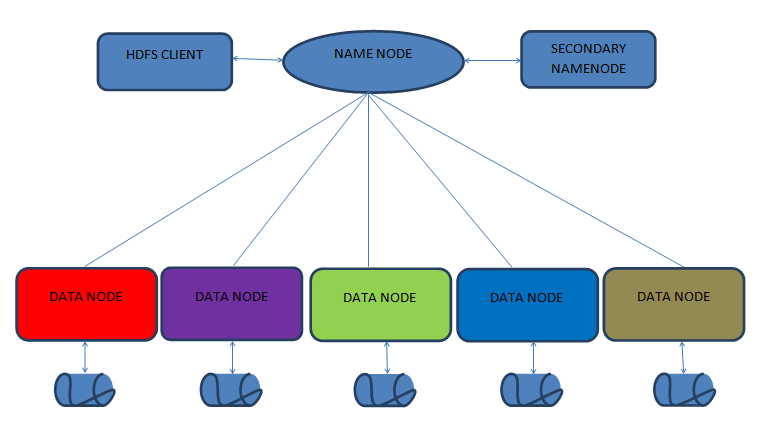 We have already understood Hadoop architecture and now it is the time to start doing some visualization of Hadoop.