ASP.NET is a technology used for creating Web applications and Web services that are executed in the IIS server. The ASP.NET pages are compiled making the application faster that classic ASP. It provides good level of consistency over the web applications. It has a large set of user controls, XML based components and user authentication. 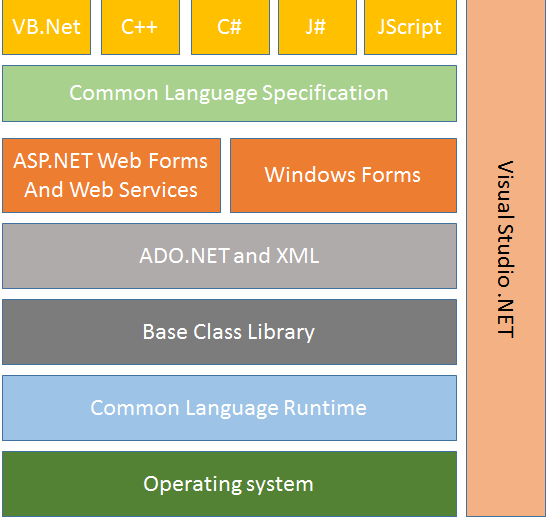 The ASP.NET framework is as shown in Fig (a). There various components of the ASP .NET framework and their features are mentioned below:

The Common Language Runtime (CLR) is used as execution engine for .NET framework. All the ASP.NET code is executed in the CLR. It performs functions like security, memory management, exception handling, thread execution, code verification, code security. The Just In time compiler is used for compilation of the ASP.NET code.

The source is compiled into the intermediate language code. The JIT compiler coverts the IL code into native code that is specific to the system.

The Base Class Library is the functionality available to all the .NET framework languages. It provides various features like database connectivity, XML document manipulation, classes and interfaces that are reusable with the CLR.

ADO.NET is used for the database operations in .NET. It works efficiently with SQL Server, OLEDB, XML. The operations like accessing data from the data source, updating and manipulating data are performed through ADO.NET. Extensible Markup Language (XML) is useful for designing the web pages in .NET

The Web Forms user to create Web based applications. They include web pages and several GUI components for designing. It helps simultaneous addition of controls at runtime and design time.

Web Services are used when the user needs specific task to be executed. They are used for creating single application or distributed on the web.

The Common Language Specification (CLS) is a set of language features used for developing web application and web services. It ensures interoperability among applications without the language dependency. It defines  a subset of Common Type System (CTS) providing objects of different languages to interact with each other.

The Visual Studio .NET is used for developing all the web and windows applications. The GUI interface and extensive built in class libraries are provided in the component. Web Services can be developed and deployed using Visual Studio. 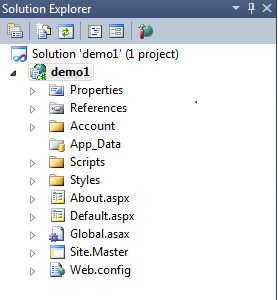 The design window of the ASP.NET application is where the controls are added in the web page. Various styles can be applied to the added controls through the properties of the controls. 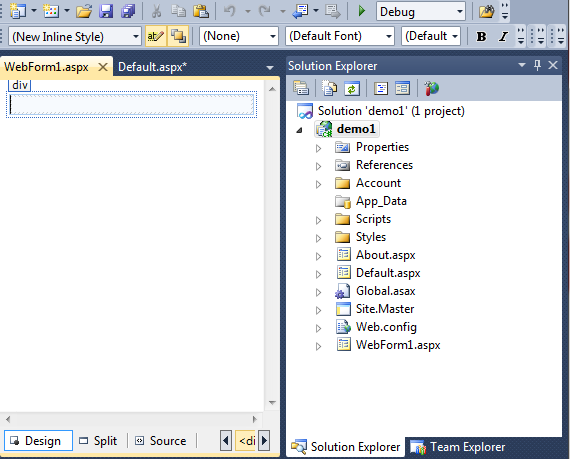 The properties window for the application is as shown below:

To execute the application, user can hit the ‘F5’ key, the control will be deployed on the web page. The code executed on the server will be shown as below:

The example of AutoPostBack property is mentioned below:

In the code behind page, add the code for the event handler of the drop down list.

The output of the AutoPostBack property for Drop down list is shown below:

The Event Handler are used for handling the action performed by the control in the application. Every control is associated with an event. The functionality to be performed is added in the event handler in the code behind file.

User can create event handler through Properties window and code editor of the ASP.NET application.

1) Create an event handler through the Properties window.

Navigate to the design view of the application. Select the control for which you want to create an event handler. In the ‘Properties’ window, select the events symbol which is visible as shown.

If the code editor is a single file web page, user can switch to the Source View to add the event handler.

If there is a code behind page, navigate to the Solution Explorer. Right click for the specific page and click ‘View Code’. Select the control from the drop down list and click on the event associated with the control. The event handler will be added for the control.

Consider an example to create a handler for page events. In the code editor create Page_event method. The page will automatically bind page events to the methods present in the code. The AutoEventWireup attribute in the @Page directive is set to true. As a result the page binding is automatic. The example of the page_event handler is shown below:

Consider an example for adding the handler to the control. The method name can be selected by the user. In the markup of the control, the event handler name is written as On<event name>. Consider a Button Control which has OnClick event bounded for it.

The source code of the Button Control is shown below:

The code behind file containing the event handler is shown as follows:

The output when the code is executed on the server will display the text present in the Textbox.