JUnit (junit.org) in version 4.x is a test framework and open source software for the Java programming language. it uses annotations to identify methods to specify a test.

JUnit was designed by Kent Beck and Erich Gamma for writing and running test cases for Java programs and it includes core test framework class hierarchy. JUnit defines a common language for writing tests. For web applications JUnit offers the advantage to test the application without server.

The main websites for JUnit are the http://www.junit.org/ and the Github project page.

The framework creates the relationship between two processes: development and testing and automates the process of running tests.

JUnit is known as a standard for unit testing in Java and is included in many testing products which extend or are based on JUnit. The framework is not included in JDK, but many IDEs have built-in support for JUnit.

JUnit is simple to use and increases confidence in the correctness of the code. It can improve the design of the tested class because it makes more clear about how the objects are actually used.

A JUnit test is represented by a method contained in a class used only with the scope of testing.

Tested written with JUnit 4.x version should be annotated with @org.junit.Test annotation.

The annotated method uses the method from JUnit framework to check the expected result of the code versus the actual result.

Class to be tested:

In order to launch the test in Eclipse right – click on the test class MyClassTest.java and select Run As > JunitTest. 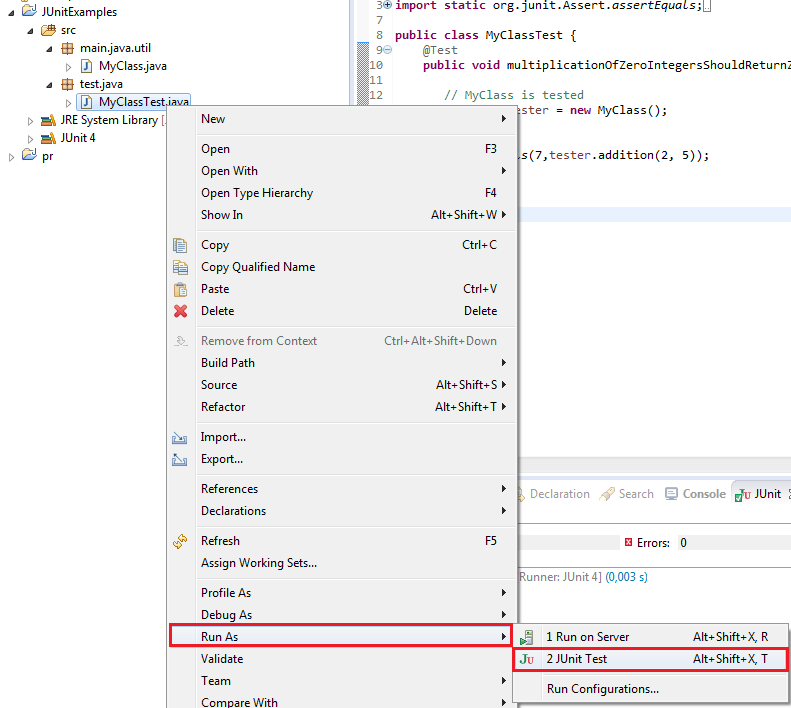 The result is obtained in the JUnit console:

The result is green if no error is present and red if the expected result is different than the obtained result.

It is recommended that the test class should have the “Test” suffix in their name because the Maven build system will automatically include such classes in its test scope.

The name of the test class should also explain what the test does in order to know the test scope without reading the implementation.

A test can be run using a set of background resources or data commonly named as fixture. A fixture is created and destroyed by a TestCase through its methods setup() and teardown() which are executed during the running of the TestCase

The TestCase class calls setup() method before running each test for initialization and tearDown() when the test is complete for cleanup.

The test methods are put into the TestCase in order to share the fixture code. This is one of the design goals of JUnit: to reuse the fixture between the tests and to write more quickly and more tests.

The general test steps in Junit testing are:

TestCase lifecycle can be represented by the following diagram:

In JUnit 4.x the methods setup() and tearDown() have been replaced by annotations:

The extending of the TestCase class is no longer necessary beginning with this version.

In JUnit 3.x the example of testing used before (see 2.2) differs in not using annotations and extending the TestCase class:

It is recommendable that the versions 3.x of JUnit to not be used anymore because many other related frameworks have started to declare deprecated the JUnit 3.x support.

For example, from Spring 3.0 reference documentation:

In general the latest stable release of a framework should be used when starting with a new project.

The unit contains more packages, but the most important is garnet.framework because it contains all the core classes.

Assert – this class defines a set of assert methods.

TestCase – this class defines the fixture to run multiple tests.

TestResult – this class collects the results after executing a test case.

TestSuite – this class is a composite of tests.

The declaration of this class is:

Test classes are defined by annotate a method with @Test

To distinguish test classes from productive code they have a pre/postfix.

The declaration of the class is:

The class defines the fixture to run multiple tests.

The declaration of the TestResult class is:

TestResult collects the results after executing a test case.

TestSuite is used for the purpose of grouping and invocation. It groups test classes from the same package.

TestSuite is a container used to group tests to build test cycles:

TestSuite can be nested.

Methods of the TestSuite