Variable is a location in the memory that has name and value associated with it. The values can be integer, decimal or character. C# is type – safe language. The compiler checks the value stored in the variable is of the appropriate type. The values of the variables can be changed by the user.

The syntax to declare and initialize variables is as shown below:

The example of variable declaration is as shown below:


where, msg1 and msg2 are the instance variables of the class message.

The rules for naming variables in C# are as follows:

1) A variable must begin with a letter or an underscore ( ‘_’ ) followed by the sequence of letters, digits, or underscores. The first character in the variable name cannot be a digit.

2) It should not contain any spaces, symbols or special character in the declaration

3) It must be unique for every variable

4) The keywords cannot be used as variable names

The Built – in types are predefined data types that can be used directly in a program to declare variables. C# is a strongly typed language. The list of built – in types supported by C# are as follows:

The C# built in types can be used in several ways as mentioned below:

Built – in types as variables:

The data types name and int are used as variables in the above example.

Built – in types as constants:

Built – in types as return values and parameters

Operators are used for processing variables and returning values to the user. An operator is a set of one or more characters used for the computation process. Operands are the one on which the operations are to be performed. Consider the following expression as mentioned below: 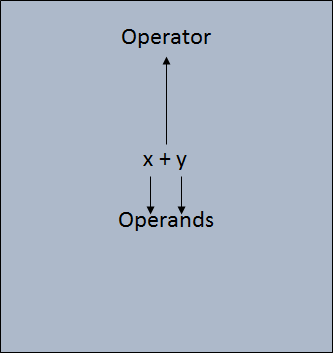 User can use the following operators in C# programs:

3) Unary operators: It is used to increment or decrement the value of operand by 1. The following table shows the unary operators in C#.

An array is a data structure that contains a number of elements of the same type. An array is declared by defining the type of elements inside the array followed by empty brackets and a variable name. The array index starts with zero. The first element starts at the 0th position. The last position of the element will be total number of items – 1.

In C# arrays can be of two types as fixed length or dynamic. A fixed length array can store a predefined number of items. The length of the dynamic array increases when user adds new elements to it. The declaration of array in C# is as shown below:

The code snippet declaring that array can store 4 elements is as shown below:

Accessing Arrays: User can access array items by passing item index in the array. The following code snippet uses the Console method to display the items.

Arrays in C# can be divided into three types as mentioned below:

1) Single-dimensional array: Single dimensional arrays are used to store number of items of a predefined type. All the items are stored in contiguous location starting from 0 to size of the array – 1.The declaration and initialization of a single – dimensional array is as mentioned below:

A multidimensional array items are represented in a matrix format. To access the elements user needs to define the matrix dimension. The following code snippet is used to define the access to members of an array.

3) Jagged Array: Jagged Arrays are arrays of arrays. The elements of a jagged array are other arrays. While declaring jagged array, add two brackets. The following code snippet is used to initialize the jagged array.

User can provide values to array elements at the time of initialization. The code snippet for it is as shown below:

User can access individual items of jagged array in the following way: