In 1978, Dennis Ritchie and Brian Kernighan published elaborated description of C together. There were some short comings of K & R C implementation and it was overcome by  ANSI. ANSI stands for American National Standard Institute standards. 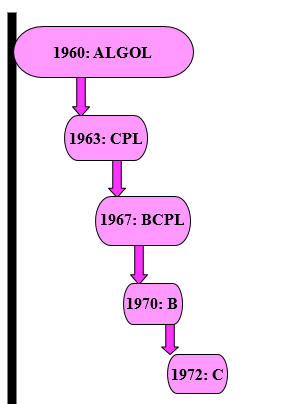 Another language came into existence and it was named Combined Programming Language (CPL). It was too hard to learn and really difficult to implement. It was too complicated populated with many features.Basic Combined Programming Language (BCPL) came into existence. It was developed at Cambridge University. But BCPL was too specific and hence it became less powerful. BCPL was followed by B language developed by Ken Thompson. But B language too became specific. So Dennis inherited features of B, BCPL and added some features to develop a new language and named it C in 1972. It serves both as general-purpose language and specific-purpose language.

There are many reasons behind the popularity of C but popular factors are as follows:

C language is a middle level language. Programming languages can be easily divided into three broad categories and they are:

The way I am using English language to communicate you about C language similarly, computer needs a language to understand what the programmer want it to do!! The procedure of learning English language began with learning alphabets or characters followed by the procedure of combining alphabets into words, which in turn followed the combination of words into sentences and then paragraphs. For learning C, we have to first understand alphabets, numbers and symbols followed by the proper usage of constants, variables and keywords. Then we shall learn to construct instructions which required the proper usage of constants, variables and keywords. A group of instructions are combined to form a program.

Let us point out some of the main characteristics of C language:

C is a portable and efficient language hence it is used to develop both system and application software. Some of them are as followed:

We are concluding the first chapter with this. Second chapter with deal with the execution environment which we will use to learn the language. Thank you.