Hello readers!! Hope you are doing well. Today we shall learn about threads. Just like a cotton thread which you use to stitch clothes threads in computer science is one of the indispensible phenomenon about which you should be aware of. Let us not waste time and learn threads.

Thread can be understood as a process is a program which executes a single thread of instruction. We can say single thread of control allows the process to perform only one task at one time. For example when we run a word processor we can say a process is running word processor which is a program and it is under control o a single thread of execution. We cannot type numbers and characters at same time and run the spell checker concurrently or simultaneously. Modern operating systems have modified the process concept to allow a process to have multiple threads of execution so that more than one task can be accomplished at the same time.

A thread comprises a thread ID, a program counter, a register set, and a stack. Thread has a sharing nature hence it can share its code section, data section, and other operating-system resources, such as open files and signals with other threads belonging to same process. Thread is considered to be a basic unit of CPU utilization.

Processes are known as traditional or heavy-weight by this we mean that process has a single thread of execution. When a process can support multiple threads it can perform multiple tasks.

Thread based multi-tasking implies to an environment where thread is the smallest unit of code which can be dispatched. This implies that a single program can perform more than one tasks at a time. Thread-based multitasking handles small details in a code.

Multitasking threads requires less overhead with respect to multitasking processes. Processes require their own addresses spaces. When we talk about interprocess communication it becomes limited and expensive. Context switching in between processes becomes unaffordable at times. Threads are considered as light weight as they share same address space and switching from one thread to next is less expensive.

With multithreading we can write impressive and efficient programs. They make the best use of CPU as idle time can be kept minimum. When we talk about networking this is important as idle time is very common in such environment for example rate of transmission of data packets over network might be fast slow as compared to the rate at which computer can process it.

In single threaded environment program has to wait for each of the task to complete before it can proceed to next one even though CPU is idle. With multithreading we can gain access to idle time and make use of it.

Support for threads can be provided at two levels, namely-

Let us have a brief idea about these models

In this model many user threads are supported by one kernel thread. Thread is managed by thread library in user space. It is efficient. But if one thread makes a blocking system call then entire process is blocked. Only one thread can access kernel hence so multiple threads cannot run on a multiprocessor parallel as it is supposed to be. 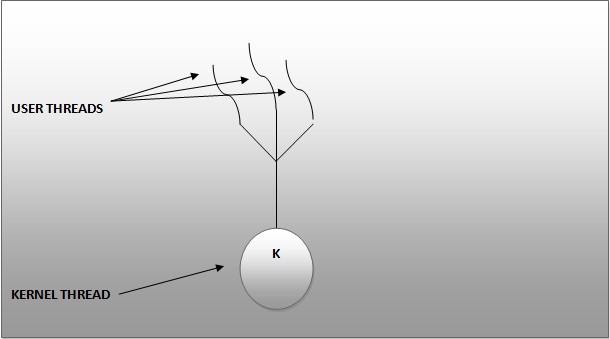 Figure many to one model

In this model each user thread is mapped by one kernel thread. This model allows multiple threads to run in parallel on multiprocessors. This model provides more concurrency as if any one of the makes a system blocking call the entire process is not hampered from continuing its task. Creating one user thread corresponding to each kernel thread is an overhead for system. As creating an kernel thread can create overhead for application and in turn it will hamper the performance of application as a whole. The one-to-one model allows for greater concurrency. But the developer has to be careful not to create too many threads within an application. 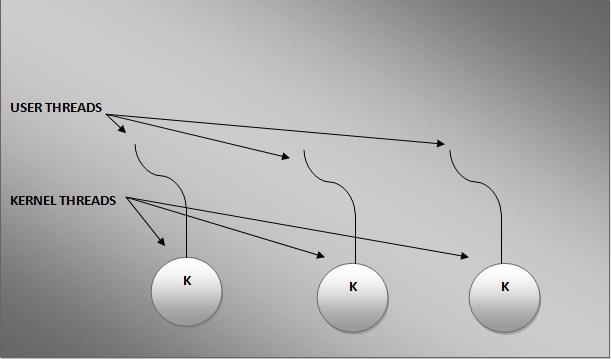 Figure One to one model 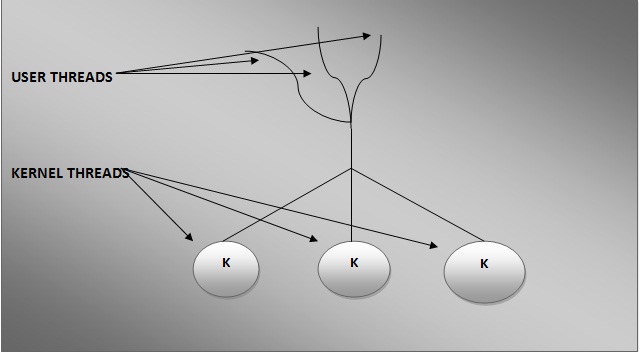 Figure many to many model

Congratulations guysJ!! We are done with this section. Hope you learned something interesting and useful. See you in the next section. Till then keep practicing. Happy App developing!!!